MobilePakhi.com - it's our own ratings

All product ratings are based on reviews from our MobilePakhi.com team.

The Realme X7 (India) has launched in Bangladesh with two variants of RAM of 6/8GB & storage is 128GB. The date to release the phone is 2021, February 12 in a recent time.

The phone has a display of 16M colors with 6.4 inches, 98.9 cm2 (~82.6% screen-to-body ratio). Realme X7 is a dual sim (Nano) phone with Realme UI based on the Android 10 operating system. The phone has a MediaTek MT6873 Dimensity 800U 5G (7 nm) processor. For connectivity, the phone has dual-band WiFi, Bluetooth 5.1, GPS, NFC and a USB Type C port. The smartphone has a (Non-removable Li-Po) battery, which supports 50W fast charging. It is worth noting that in addition to the X7, the Realme X7 series also has the X7 Pro, which is equipped with the MediaTek Dimensity 1000+ flagship processor with a battery capacity of 4500mAh.

The battery life has a built-in 4300mAh, which can basically meet the needs of one day. The 50W flash charge is very powerful.

The appearance and feel are made of 3D transparent injection molding + filming process, which looks good, especially the blue, positive It should be beautiful when closed. It weighs 175g and has a thickness of only 8.1mm. It also feels very good. The 64-megapixel four-camera can meet our daily photography needs. According to the bodyweight of 175g, it cannot be a glass body.

In addition to using the MediaTek Dimensity 800 chip, the lightness and thinness of this phone is also a major attraction.

Q: Is this phone available in the market?

Q: What is the capacity of the battery?

Q: What is the megapixel of the camera?

Q: What the size & resolution of the display?

Q: What is the country of origin?

Q: What is the speed of the internet?

In addition, the Realme X7 uses an AMOLED digging screen, the rear main camera is 64 million pixels, and supports SA and NSA dual-mode 5G. Which will give you a great experience in a networking system.

The previous information showed that it uses MediaTek Dimensity 1000+ processor, but today some people broke the news that the Snapdragon 860 has released for the first time, which aroused the expectation of netizens. Which is going to be great excitement. Has selfie/front camera also to take a photo in day & night. Because it has lots of effects to take any kind of photo. For game lovers also this phone will be a great deal to buy because it has a Mali-G57 MC3 Gaming processor.

Snapdragon 860 has been rumored for a long time and has been officially released. Realme X7 is reported that is also based on the 7nm process. It should be a streamlined version of Snapdragon 865. X7 is estimated to reduce the CPU/GPU core frequency but retain the complete 5G baseband part. There is the news of the Realme X7 player version, saying that it has debuted the Snapdragon 860. Anyway, Realme X7 (India) will be a great deal to buy in 2021. You can go for it at your reliable price.

Don’t forget to check the IMEI no.
You may also like other Brands review 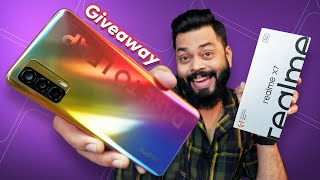